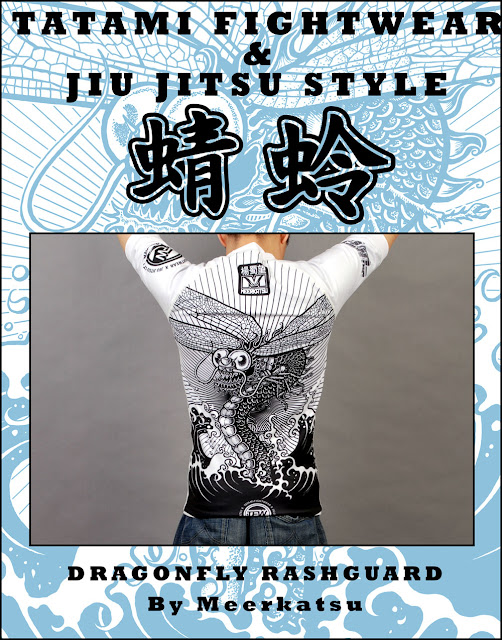 I often write and shoot photos for a UK based magazine called Jiu Jitsu Style. I was also asked by them to create art for a rashguard that will be made by Tatami Fightwear and bear the Jiu Jitsu Style branding. The result is my 'Dragon Fly' creation: half dragon, half dragonfly!

Here's how this crazy chimera came about...

﻿ ﻿ I've always thought dragonflies were pretty cool insects. I mean they are huge for a start with gigantic wings in proportion to their body size and their compound eyes wrap all the way over the top of their heads. It did not take me long to figure out that crossing the dragonfly with the body of a Chinese dragon would be a very cool trick indeed! 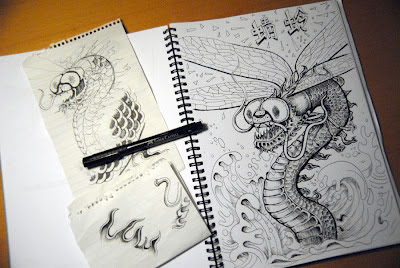 As you can probably see on the  right hand sketch, I pretty much had the concept I wanted on the first take - rare for me since I usually take a lot of tweaking and fiddling over many drafts before concluding on the final design. Over on the left, you can see my next series of sketches where I am practising what kind of scale patterns to draw on the body and some spine tassel details.

Once I gained client approval, I moved straight onto drawing the proper version. I used Edding 1880 brand of pigment fineliners onto Bristol Board and a fairly even mix of stippling and broad line strokes. 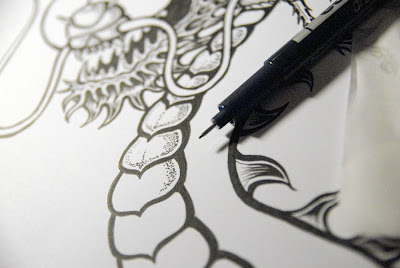 Most of the made-up creature was drawn without use of reference material but I wanted to really get the vein pattern on the wings as authentic as I could. So I googled up some dragonfly wings and used those as photo references. As you can see below: 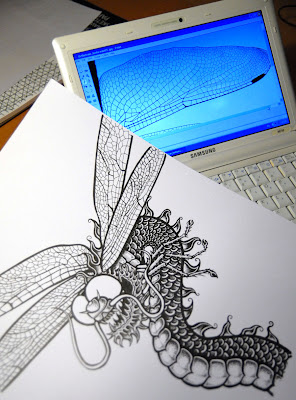 Having spent a long time inking up my dragon fly, I didn't want to make a hash of the waves so I drew that bit seperately. The style is kind of a mix between Japanese Hokusai waves and Chinese sea dragon waves - as discussed in my previous post about where my dragon inspirations originate - most of those sculptures have a distinctive pattern depicting ocean waves. 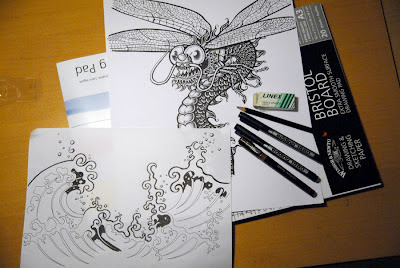 Next step was to scan in both portions of the art and compose them together using Photoshop. After I was happy with the layout, I transfered the design over onto Illustrator (Live Tracing the lines in the process) and began adding logos and a starburst background. 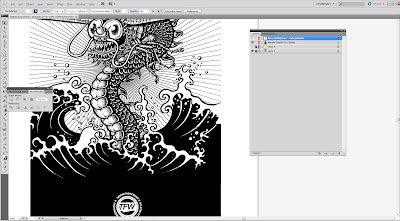 With the final design completed, I showed it to both Jiu Jitsu Style and Tatami Fightwear. My original idea was to make two versions of this rashguard - the one you see, and the one below, which is basically the same only inverted. Tatami wanted to try incorporating both items into one rashguard - hence the world's first (and so far only) reversible grapplers rashguard. 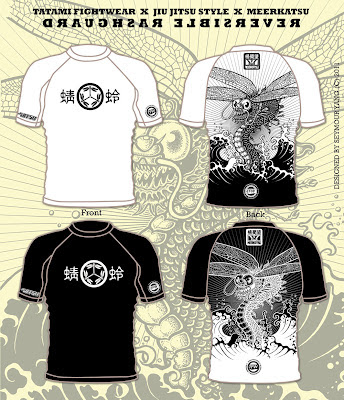 Having tried out the test sample that Tatami had made up, the double layered top was quite thick, but surprisingly comfy to wear. Not something to wear in hot sticky weather but perfectly fine for general grappling. However with a price tag of exactly double the cost of most normal rashguards, I decided to kill the idea - at least on this particular design - as I knew that such a price tag would put off most buyers. 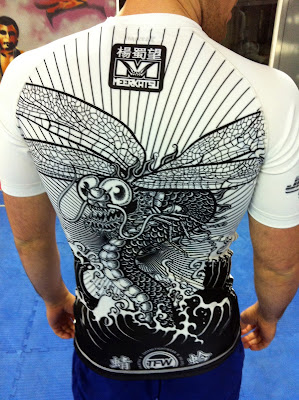 The photo above is the second series of test samples without the second inverted layer. Final production version should be available to buy (via the Jiu Jitsu Style shop or the http://www.tatamifightwear.com/ store) in  a few weeks time.