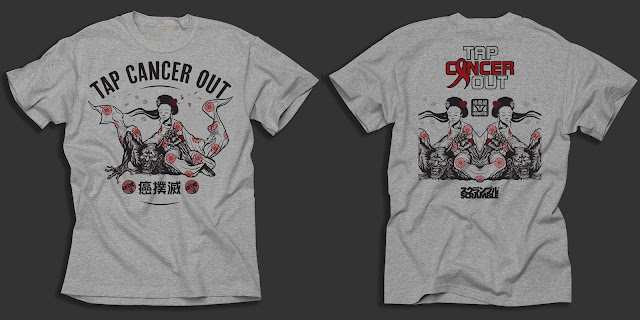 Tap Cancer Out is a charity non-profit that is run by members of the Brazilian Jiu Jitsu Community. The charity raises funds through the sale of merchandise and events for various established cancer charities. I designed this t-shirt alongside fightwear brand Scramble and proceeds from the sale of this tee will go towards Tap Cancer Out.

Here's how I put it together...

I first had the idea of a geisha girl submitting a warrior demon character around 18 months ago. It sort of just popped up in my head and I quickly sketched it down, as you can see below. What I really loved about this idea was the fact that the girl was utterly serene and calm while her foe was writhing in agony. That's a lot like how jiu jitsu can be - one person dominating with perfect technique while the other flaps around helplessly. 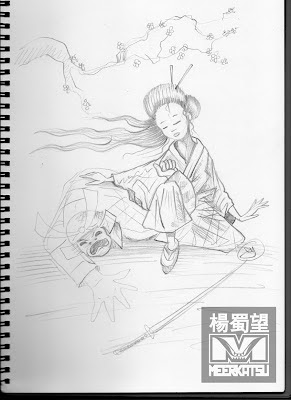 As I say that was a while ago and it remained in my sketch book until the TCO assignment came up, I realised this would be a perfect concept to match the charity's ethos.

I resketched the idea, this time I wanted to change the samurai warrior to something that had a more human face where I could show more of an expression. 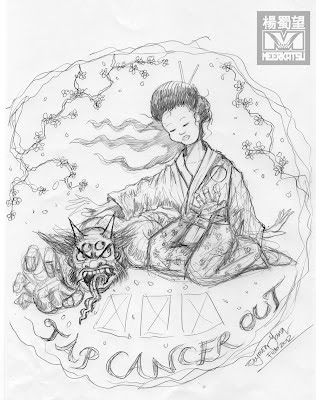 As you can see above, I used a four eyed demon. I showed it to some close artist friends of mine and they all agreed, the four eyes were a bit distracting, even goofy as one person pointed out. I guess it does look silly and takes away from the purpose of drawing a more human like face in the first place. But check here and here for Japanese demons, known as oni, who are depicted with multiple eyes.

So it was back for another re-draft. 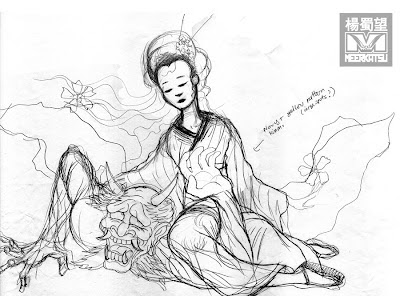 Again, I asked the opinions of some of my artist friends and while they all agreed the demon was much improved, a couple suggested that the geisha's posture and leg position needed tweaking. The image below is a sketch from Swedish based artist and designer Ola Lanteli (http://www.lanteli.se/) who is a lot more adept at drawing human figures than me. His sketch showed how a different head angle on the Geisha would give the girl a more natural posture. It was very very helpful! 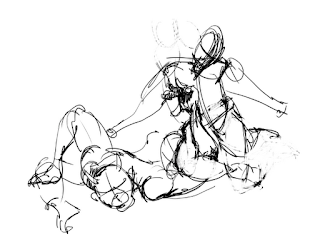 Another artist friend of mine - Bong Abad (Gawakoto) - specialises in comic book art and he sent me some tips on an improved leg position: And so, with the anatomy 101 in my system, it was off to work taking my pencil roughs and drawing over the top using Adobe Illustrator (inking up). For most of the piece, I used the pen tool, with the odd brush tool thrown in for more expressive strokes. 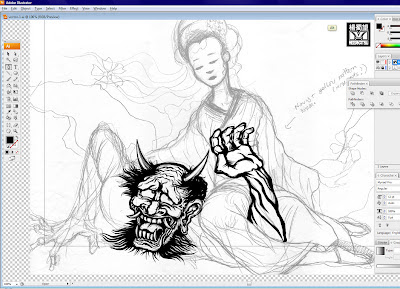 I really enjoyed this bit of the project. The joy of working on ai is that I can take a lot more risks with the stroke placements and add or subtract with ease. In the above image for example, it is clear to me that the demon's hands are too big. If I had drawn this with inkpens, it would be a nightmare to correct. But on computer, I just isolated that part of the paths and shrunk the whole arm by 10-15%. Below is the final part of that piece:

I added some cherry blossoms and chrysanthemum to the design to add texture and decorate the kimono. But I still was undecided on the final colour choice. Below is one option I looked at:

While the colour version gave the piece a lot of punch, it would have been a real nightmare to print onto t-shirts. Following advice from my printer friend (Carlos at HandPrint Store) I accepted that a more simpler colourway would have been better. But the project was not quite complete. I wanted some input from my friend Matt at Scramble and he offered up the text placement and kanji as well as overall layout and colour choices as you see in the first photo above.

I want to thank all my friends who kindly contributed to making this piece as perfect it could be. It's a good cause run by great people and a cause I am happy to support.

The t-shirts should be out in a couple of weeks, check back on the Tap Cancer Out facebook page for more news on when the t-shirts become available.