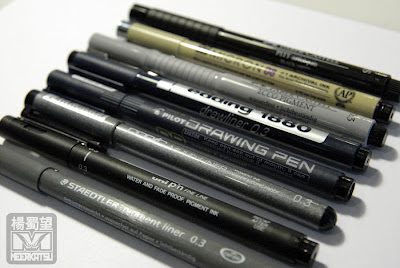 Caveat: This review represents my own personal opinion. I am not sponsored by any company. The comments I make relate directly to me own personal style of inking, yours might be different so I advise purchasing a couple of brands of pens and trying them out yourself to find the best one for you.

Introduction
Fineliner pens are typically identified as tiny width, fibre-tipped, technical drawing or sketching pens. The ink is invariably pigment based, lightfast and permanent. They are best used on smooth paper with little grain. There are dozens of brands each varying considerably in price and each with their own handling quirks. I decided to buy a whole bunch of these and test them out over a number of drawing projects.

Faber Castell - Pitt Artist Pen
£2.08 for one from Cultpens, £5.83 pack of 4 from Amazon
I picked these up from Hobbycraft thinking they would be suitable for what I needed and immediately regretted buying them. To be fair, the Pitt pens are not sold as technical fineliners, but are labelled 'Artist' pens. Now I know, anything labelled 'artist' pen means they are very very soft tipped and prone to inaccurate linework. They do produce a nice thick and very black line which is useful for fill-in work, plus the brush nib pen might come in handy for more expressive work. I wouldn't press too hard on these pens however as the nib feels like it buckles under even the most moderate of pressure. In fact I dropped my 'F' (fine) tipped pen on the floor. It landed tip first annoyingly, which shattered the nib! The one great thing about the Pitt pens however is the chunky and ridge textured barrel. These were really great to hold and use. 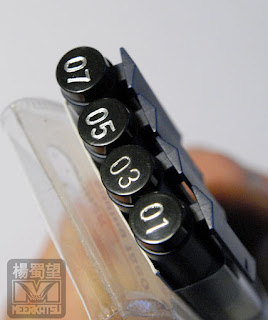 These pens were really good. To be honest, I could not tell them apart from the Sakura Microns. They both have a very similar feel when drawing and the barrels are also similar - although the Eddings are a wee bit thicker (which I prefer). The nibs were pretty hard and the ink flowed just right when drawing on Bristol Board - I used the 0.1mm, 0.3mm and 0.5mm widths. Overall, a fantastic pen that is easily available and the cheapest among all the pens reviewed here! I'll use this a lot more to assess how the pen performs over a longer period of time. 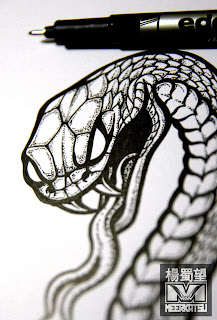 Sakura - Micron Fineliner
£13.50 for pack of 6, or £2.32 each from Cultpens.co.uk)
These pens are cited by many people as the very best pigment fineliners money can buy [link] so I had high expectations of the Microns. Straight out of the pack, these pens draw very well and produce clean consistent lines from a nib that feels tough. In fact, I really put these pens through their paces on the artwork here, which used all the nib sizes and in some areas I was pressing very firmly down - without any nib buckling. These are definitely some seriously tough pens.

But they're not perfect in my humble opinion. For a start, I'm not really a fan of the shiny, thin and shorter than the others plastic barrel. Whilst perfectly comfortable to hold during a normal session, over a longer session, I found was a bit less comfortable. I was also annoyed by the numbering system. Why call the pen an '02'? Cos in my mind, I'm thinking 0.2mm when it is in actual fact a 0.30mm (yes I know, it is number two in the series, but I prefer a pen labelled by width number).  Finally, I found that the ink was not really that black. Maybe it was my dodgy eyes, but some of the other pen brands definitely produced lines that were more black. Sadly this is not really picked up in my close up photographs, but it's something I felt was quite noticeable.

On the piece above (Tengu) I used pretty much the entire pack of Micron width sizes. They were good enough to allow me to draw the very fine details of each feather, and also cover the thicker, blacked out areas.

Minor quibbles aside. At a price of £2.32 per pen, the Microns are very high quality for a fairly high price.


Mitsibushi Pencil co - Uni Pin Fine Line
£1.74 each from cultpens.co.uk
The Uni pens are very cheap. I was keen to see if the price was reflected in the quality. Straight out the pack, the ink from the Uni's were noticeably darker than all the other brands featured in this review. It was like using a miniature solvent based permanent marker pen - which I suspect is exactly what it is.

The Unis have quite a thick, chunky barrel that I really enjoyed using for extended periods of time. The ink was not only very dark, but very free flowing so I was less happy using it for fine lined detail work. The nib seemed okay, not as hard possibly as the Microns or the Eccos, but not bad.

I liked using these pens for fill-in work but one side effect of the free flowing ink was that it took a little longer to dry. I made several accidental smudges using these pens, where I had not noticed any from using other pens.

Overall, for the price, the Unis are great value. I personally would buy a set of thick widths and use them for large fill-in work rather than the finer lines.


Copic - Multiliner
£2.69 each from Cultpens
I haven't used these pens on a large piece yet, just small doodles. Initial impressions seem to suggest it's a quite flexible tip, a touch softer than the others in this review. More details later. 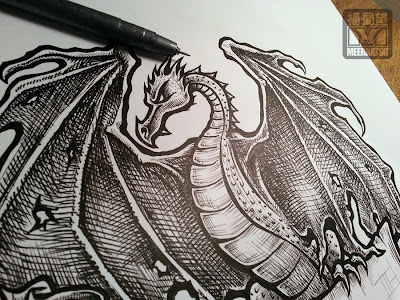 UPDATE (5th September 2013)
I purchased a pack of 8 Copic Multiliners for the frighteningly high price of £25 from my local art store. I don't know why, I already have enough good pens, but something inside told me to try them. Since purchasing them, I have used them exclusively non-stop over a number of major pieces of work. In addition to the standard thickness fineliners, the pack included two brush pens. Normally I would ignore them but I decided to try them and to my great surprise, they really do deliver a decent brush-like strike which helped me with some hand-lettering (below).

I really can't rave enough about the Copics. The flow of ink suits my drawing technique perfectly and the pigment is nice and rich. I feel also that the tip is slightly softer than the others here and this provides a wee bit more 'give' when applying pen to paper.

Finally, I should say that I've been using the 0.3 and 0.5 mm pens the most but I have also found a need for the others too, including the teeny weeny 0.05mm pen and they have all performed marvellously! 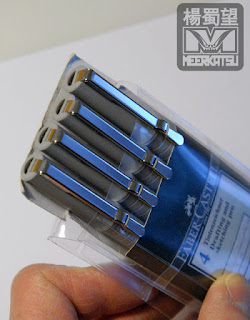 I almost did not buy these pens because I assumed they would be the same as the Faber Castell Pitt Pens above. How wrong I was. These Ecco pens have a nice smooth flow, a comfortable contoured barrel and good dark ink. I really loved working with these. I used all width pens on the dragon art here and each pen was consistently great. 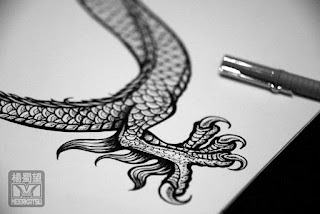 The nib was firm and the ink lines followed my freehand movements beautifully. I would happily use these for any major work where I need to count on quality consistent lines. The only really annoying niggle I have is that the pen widths are not tagged on the end of the pen cap, this means I cannot see which pen I want without taking all the pens out the wallet. A minor niggle, but I really like keeping the pens in the wallet because loose pens go wandering, especially in a house full of curious kids! 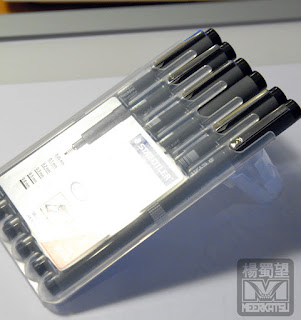 I didn't have a happy time with these pens. Straight out the wallet, the 0.7mm looked busted to me, the tip was exuding splodges of ink. The other nib widths were really soft and the line was not consistently even. Worse still, the ink flowed out of the tip too freely, meaning inaccurate and sometimes splodgy lines. It was like using a watercolour pen. Maybe I was too used to the harder Eccos and the Microns previously, but I just could not get used to the softness of the tip. I also did not like the brushed plastic pen barrel. Despite this, I persisted with these pens and managed to complete my dragon artwork below. I noticed the one advantage of a softer nib was that one could create almost brush like strokes, where the line width varies depending on the pressure applied. Problem is I don't use this technique much so it was less important to me. Overall, a big shame because the multipack is a reasonably good price and incorporates a handy stand as part of the casing. Plus the pens claim an impressive 14 hours with the cap left off before they dry out.

Pilot - DR Drawing Pens
(£2.16 each from Cultpens.co.uk)
These pens are not bad. I found the nib felt very hard, possibly a touch too hard and the inkflow a little stingy. Hence, when drawing on smooth paper, it was a little too much hard work. Having said that, I only have the 01 (0.28mm) and the 02 (0.35mm) sizes (again, annoying code system grrr!), which are not a great range of widths for the project I tested it on (the turtle drawing below). The hard tip meant I managed to draw consistent lines, but I would still like a wee bit of give. Overall, I think the best thing I like about these pens are the graphics on the barrel. The words say DRAWING PEN in big letters and when using these out and about, they made me feel pretty damn fly as curious onlookers observed how I was using like totally proper DRAWING PENS and not any of those amateur NOT QUITE PROPER DRAWING PENS. 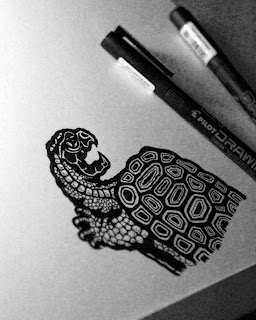 Conclusion
Every artist will have their own style and personal preferences. From sampling the various pen brands above, I can conclude that I like a  pen to have a little bit of give but is not too soft or too ultra rigid. I also like dark inks and slightly thicker pen barrels. It helps if the pen costs less than £2 a unit too, but the price is negligible if it means I can work a much cleaner piece of art. Hands down my favourite pen of all of the ones sampled are the Copic Multiliners - they are a joy to use and deliver great lines which means I can get on with the job of drawing exactly what my imagination intended.

If I had to pick another brand, then the Faber and Castell ECCO pens get my number two vote of choice. I would add that the Edding 1880's and the Uni Pins in very thick nib sizes have been handy in my arsenal when filling in big spaces. For filling in really big spaces with black, I have used a basic Sharpie pen, which is a bit stinky but does do the job of filling in nicely.

Whatever pen you decide to choose, good luck with your projects.

About me: I am a freelance illustrator specialising in designs for the fightwear apparel sector.You can read more about me in this interview from The Shirt List.
:)