Creating designs for t-shirts is one thing, but event posters are a trickier business I find. Here, I'm not expected to create a work of art, but instead communicating information is the most important aspect. But without designing something attractive to the eye, that information is wasted. So it's a tricky balance. I'm no graphic designer, but recently, I was asked to design event posters for the Premier BJJ Championships - a series of Brazilian Jiu Jitsu tournaments in the UK staged at various cities throughout the year.

Cork
The first tournament is for Ireland - Saturday June 23rd in Cork, if you fancy visiting. Here's my poster design:

Here is a breakdown of my thought processes on the design...

A tournament being held in Ireland meant that copious use of green was an obvious choice for me. I designed the central character as an homage to the Notre Dame mascot (shown below):

I'm usually loathe to base my characters so closely on already created figures but I feel I made enough changes in my final version to bypass any accusations of plagiarism. Although it looks quite basic and simple, it did take me quite a while tweaking the posture, the props and expression until I was reasonably happy. The figure on the left above was too close in my opinion and didn't seem to have the kind of grit in his expression as I wanted. Some friends I showed this too suggested the pipe and leprechaun hat might help and it certainly did. 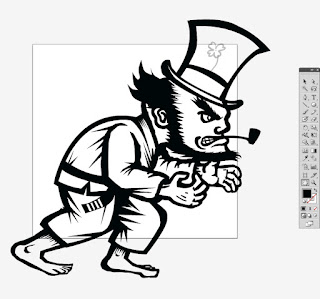 I also designed the medal. The organisers wanted something very simple and plain. The first example I showed them included my BJJ leprechaun but it was not accepted. Instead, I designed a basic celtic knot pattern border surrounding text. 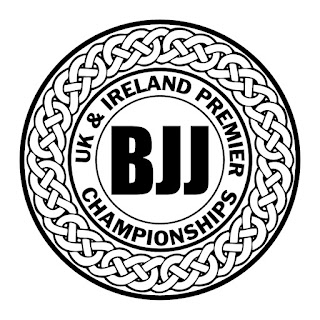 I think the medal should look nice in gold, silver and bronze!

The final portion of the design job was to collate all the information into the poster. I chose create the text freehand and fit it around the main character. It's very cartoony and designed to grab the eye with its bold blocky type. Slotting the entry details and sponsor logos along the base was done mainly because it was the only place left to place it.

Bristol
The Premier BJJ Championships have planned three tournaments this year and the next one after Cork will be Bristol - 5th August. The poster I designed for this tournament took a very different approach: 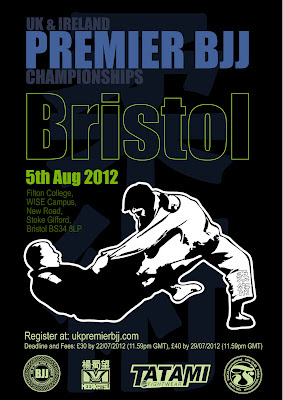 The Cork poster used a familiar Irish mascot - the leprechaun - so the poster kind of designed itself. But for Bristol, I was sort of stuck for characters. The city has a rather generic heraldic symbol for its emblem and the two main football teams (Bristol Rovers and Bristol City) have mascots that did not seem to inspire me (a dog and a robin respectively). Luckily, some of my favourite bands from the mid 1990's all came from the Bristol region - a genre of music collectively named Trip Hop, but will be more familiar by their individual names, such as Portishead, Tricky and Massive Attack.

I first chose a photograph from my archive that I thought would break down into a great graphic. 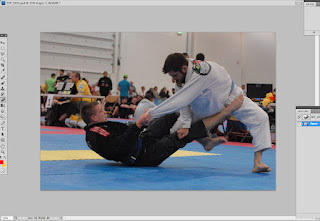 The two fighters (apologies I do not know who you are, sorry) here fought at SENI. I chose this photo because it showed them in a very dynamic position. I also noticed how the tension in the white gi produced a lot of contrasty patterns - perfect for what I was about to do with the photo... 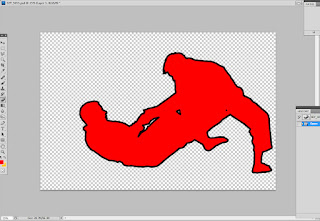 But I needed first to mask out the fighters from the background. I then applyed a thick stroke to the borders of the two chaps - all this was achieved using Photoshop.

I then divided the picture into two - one for each fighter. Using the threshold tool in Photoshop, I played with the darkness and brightness until I felt there was enough detail in each of the two fighters to look cool, while not showing too much. It's a process I first tried when I created my design for X-Guard Brand. 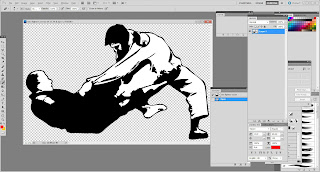 The next stage was to open the black and white image into Illustrator - which I much prefer using for layout and text work.

I took a very linear approach to the overall design. It reads top to bottom without much fuss. I guess as I  develop my poster design skills I will try something more adventurous, but for now, I think this does the job.

The font I chose was Impact. It is by far the best condensed bold font for poster use in my set-up. The colours were based on a set that Illustrator's colour guide threw up. Again I wanted that cool, almost jazz poster like vibe. The last thing I added was a very translucent background - kanji for jiu jitsu - just to add a wee bit of depth to the overall appearance. 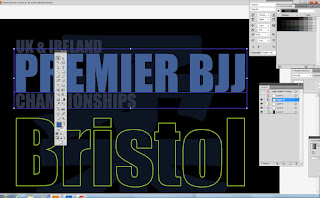 I've seen and looked closely at a lot of posters in the past few months. There is some stunning work out there. I'm looking forward to improving this area of my design output. The next competition after Bristol is for the North East, in Gateshead and I already have an exciting idea forming in my head for that event.